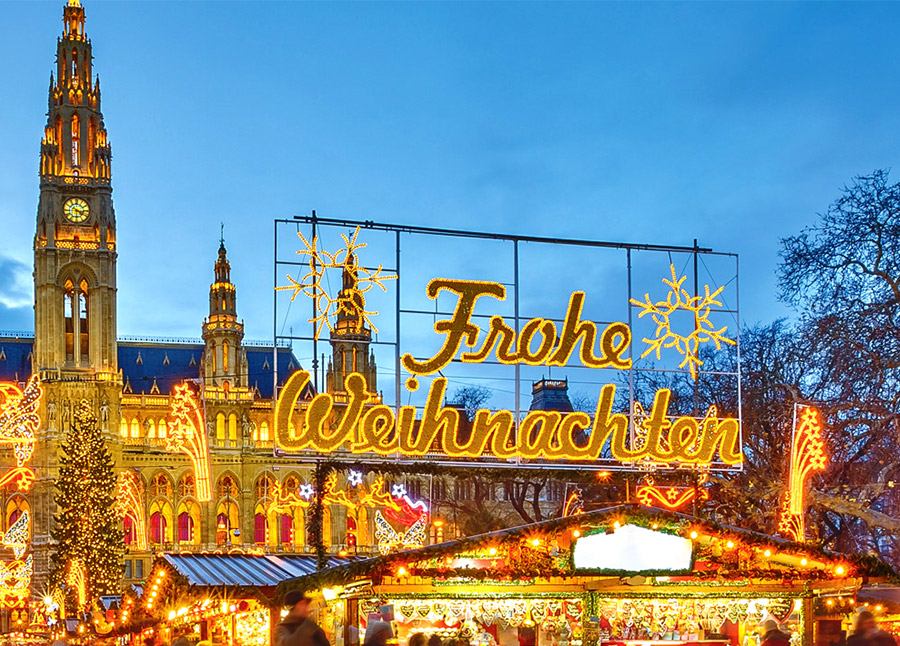 Celebrate the season in the birthplace of many beloved holiday traditions.

Budapest has celebrated Christmas for a thousand years, since the reign of St. Stephen, the king who founded Hungary and encouraged the spread of Christianity throughout his realm. As you ramble through the Christmas Market on Vörösmarty Square, admiring the handmade porcelain, stop to watch as kürtos kalács (a pastry) is baked on rods over an open fire and then coated with sugar before it’s handed to you.

In Bratislava, where a lively young art scene is revitalizing the compact city core, stalls abound with traditional Slovakian Christmas items such as medovníky (spiced ginger cookies) and šúpolie (figurines made from corn husks). Experience Uniworld’s exclusive “Taste of Christmas” program in the heart of Vienna during the day.

Glorious baroque architecture, delightful concerts and ravishing scenery will make this Christmas season unforgettable as you sail through the holidays on the Danube.

Music lovers will find many special holiday treats on this cruise, from onboard caroling to an exclusive organ recital. Shoppers will delight in the chance to pick out a variety of unique gifts at enchanting Christmas markets.

Arrive at the Budapest Ferenc Liszt International Airport. If your cruise package includes a group arrival transfer, or if you have purchased a private arrival transfer, you will be greeted by a Uniworld representative and transferred to the ship.

Located on opposite sides of the Danube, Buda and Pest each have their own distinctive character and allure. You’ll get a taste of this dynamic capital city with your choice of tours, and visit Budapest’s celebrated Christmas Market—one of the largest in Europe. Christmas has been celebrated in Budapest for a thousand years, since the time of St. Stephen, the king who founded the nation of Hungary and encouraged the spread of Christianity throughout his realm, but the city began as a Roman encampment almost a millennium before that. Over the centuries it was controlled by Germans, Austrians, Ottomans and Communists, all of whom have left traces.

Once hidden from the world behind the “Iron Curtain,” Slovakia retains an air of mystery and intrigue, and its small capital city has an unexpectedly colorful history. You’ll learn more about Bratislava’s past from a local expert and also visit the local Christmas Market—a relatively new (and thoroughly delightful) tradition for Slovakians. How do you say “Merry Christmas” in Slovak? “Veselé Vianoce!” The heart and soul of Slovakia, Bratislava is full of surprises. The city straddles the mighty Danube and has played a leading role in the politics and culture of the region for many centuries. Unlike cities with venerable Christmas Markets, Bratislava just established its first holiday market in 1993. But the Slovakians have quickly embraced the seasonal traditions of their Austrian and Hungarian neighbors—and you’ll get to embrace them as well.

Renowned for its art and architecture, its classical music, its decadent pastries and its lengthy list of famous former residents, the refined city of Vienna is a cultural treasure trove. Experience the city with your choice of tours, as well as something extra special—VIP access to an extraordinary collection of art.

One of the most beautiful abbeys in Austria is still an active Benedictine monastery, but a monastery the likes of which you’ve never seen— Napoleon himself once laid his head here in the lavish imperial quarters. With its 14th-century stained glass windows, the abbey’s jewel box of a church is the perfect setting for a soul-stirring concert of organ music. Both the millennium-old town and the valley itself have been designated UNESCO World Heritage Sites.

Your ship docks at Linz, a modern yet historic city that extends across the shimmering waters of the Danube. From there, you’ll head to Mozart’s birthplace of Salzburg, which is nestled in a glorious alpine setting that sparkles like a winter wonderland this time of year. Fans of “The Sound of Music” may recognize locations from the Oscar-winning film in the city’s Old Town, the site of the grand cathedral and absolutely enchanting Christmas Market.

Passau is a crossroads in more ways than one—three rivers meet here and three nations nearly do, making for a fascinating cultural mosaic. Get to know the town with a guided stroll, then visit the local Christmas Market on the square in front of the cathedral. You’ll find a lot to enjoy here—from miniature houses and blown-glass ornaments to spun-sugar confections—in more than 70 stalls.