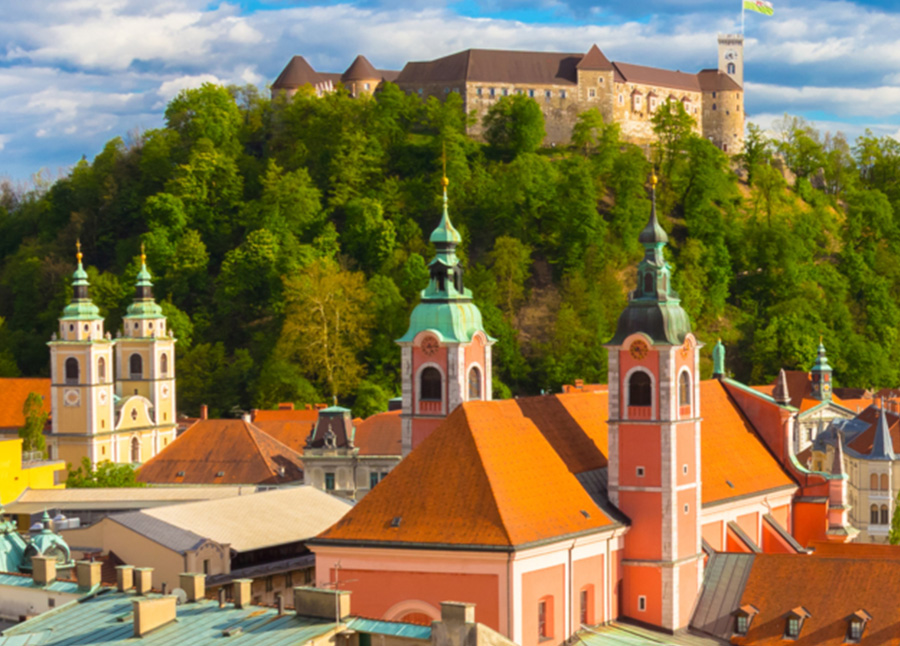 Travel between northern Italy and the diverse nations of the Balkan Peninsula, and discover a unique blend of eastern and western cultures on a one-of-a-kind journey by land, cruise and train.

Complement your journey with a 9-day trip on a private train to Istanbul, plus two nights at the Ritz-Carlton, Istanbul. You’ll sleep on the luxury Golden Eagle Danube Express with ever-changing views at your window—the perfect addition to a river cruise. Along the way, visit Alpine lake towns, historic cities across Eastern Europe, the Greek seafront and more.

On the cruise portion of your journey, travel to romantic Venice and treat yourself to a private evening opening and lighting ceremony at St. Mark’s Basilica. Depart the enchanting “City of Water” to explore the waterfront shops, colorful facades and peaceful canals unique to Burano, Mazzorbo and Torcello. Farther south, discover Chioggia—a charming southern port loved by fishermen, artists and anyone looking for unique gifts or souvenirs. Enjoy additional shopping time in “bountiful” Bologna and medieval Padua, once home to Galileo and Copernicus. Each of these enchanting locales is yours to uncover on “Cruise & Rail: Venice & Istanbul.”

Arrive at Venice Marco Polo International Airport, where you will be transferred to the ship. Unpack, relax and enjoy your first evening on the Venetian Lagoon.

With your early morning arrival at Doge’s Palace, you’ll be able to marvel at the estate in total peace. Wander through a Venetian neighborhood and experience daily life in an authentic Venetian residential quarter. Later in the evening, cap the day off with a private once-in-a-lifetime experience at an after-hours lighting ceremony inside St. Mark’s Basilica without the crowds.

Choose between a full-day in medieval Padua, home to Italy's second oldest university, or a Venice walking tour and a choice of several exciting ways to see Chioggia: riding on a traditional bragozzo or biking through this authentic fishing town.

Explore Italy’s culinary capital Bologna on a full-day tour packed with an exclusive pasta-making workshop and lunch or explore Ferrara on a half-day tour.

Today, you’ll admire the greatest sites of charming and coastal Chioggia, including a stop at the local and lively market. Your ship will move to dock overnight in Burano, where you’ll enjoy a lovely evening stroll through this multicolored island.

Spend the day exploring the northern lagoon of Venice and three of its captivating islands. Explore a basilica with an art historian in Torcello before heading to the peaceful, agricultural island of Mazzorbo. End the tour with a stroll through Burano’s rainbow of colorful homes and visit a lace-making atelier.

As your water taxi glides past narrow side canals and the Canal Grande, you’ll arrive in style at the Rialto Bridge and Fondaco dei Tedeschi. The iconic stone arch bridge sits at the narrowest point of the Canal Grande and holds numerous shops and restaurants.

Join the Golden Eagle Balkan Explorer in Venice Santa Lucia Station in time for lunch. Your cabin attendants will be waiting on the platform to welcome and escort you to your cabins. As you take your seats for lunch, the train will thread its way out of the station and onto the causeway across the lagoon that links Venice to the mainland. Your first stop is the ancient port of Trieste for a tour of the city.

Have an early breakfast onboard as the train heads for Lake Bled, one of the most picturesque and photographed lakes in Eastern Europe. Next, travel down to the Capital of Slovenia, Ljubljana, to tour the lovely, compact city by foot and by a cruise on the Ljubljanica River. Return to the train for lunch as the train follows the scenic River Sava to Croatia’s Capital, Zagreb, then spend the afternoon touring the city. Later, enjoy dinner on the train on the way towards Bosnia.

Early in the morning, you’ll arrive in the Bosnian capital of Sarajevo, which has an intriguing blend of Eastern and Western culture. It has mosques and minarets, an ancient bazaar and an atmospheric old Turkish quarter. Discover the city’s poignant history through a truly absorbing tour detailing the horrors of the Balkan War. Sarajevo suffered from the longest siege of a capital city in the history of modern warfare. The scars of war are still evident in the war-torn buildings you’ll pass before making a special visit to the Tunnel Museum under Sarajevo Airport. Your guide, who lived through the 1992–1996 conflict, powerfully brings to life the struggles that the citizens of Sarajevo faced during the siege of the city. Over lunch, you’ll travel along a very scenic line to the historic city of Mostar, the crossroads of many civilizations, cultures and religions. Mostar was one of the most important cities of the Ottoman Empire. The town’s renowned stone arch bridge linking the Christian and Muslim areas was re-built in the summer of 2004. Visit the Turkish House and the mosque before walking through the narrow bazaar streets, where you can shop for traditional souvenirs and handicrafts. Depart Mostar as dinner is served and your train heads towards Serbia.

Arrive this morning in the Serbian capital, Belgrade, the former Yugoslavian capital. Located at the strategic meeting point of the Danube and Sava Rivers, this truly cosmopolitan city has fortifications from Celtic times, medieval tombs and Turkish baths. Spend a full day here and set out on a city tour that includes the ‘House of Flowers’—the mausoleum of Josip Tito. On the tour, you’ll also see the Town Hall, Republic Square, Knez Mihailova Street, ‘Varoš’ and the mighty Kalemegdan Fortress. Lunch today will be in the spectacular Salon 1905. You’ll leave Belgrade late in the afternoon and head towards North Macedonia and Greece.

This morning, you’ll arrive in the little-visited Skopje and discover a city where the Ottoman influences are still strong. Explore the narrow streets of the Old Town with tiny shops and mosques with ceramic-tiled interiors. Meander through the Old Bazaar area, brimming with things to buy, and cross the 15th-century stone bridge that links the bazaar to the modern town. Return to the train for lunch and continue on to Greece for a late afternoon arrival into Thessaloniki. Soak up the evening atmosphere of this vibrant city by heading to Aristotelous Square and the seafront before returning to the train for dinner.

After breakfast, your train arrives in Sofia, Bulgaria’s capital at the foot of Vitosha Mountain. On your morning tour, you will visit sections of the Roman wall and admire the ancient Church of St. George, the golden domed Alexander Nevsky Cathedral and the Turkish Banya Bashi Mosque. Enjoy lunch on the train as you travel from Sofia to Plovdiv. The second largest city in Bulgaria after Sofia, ‘The City of Seven Hills’ is one of the oldest cities in Europe with more than 200 known archaeological sites. Spend the afternoon here exploring the Roman Forum and Amphitheatre. You’ll also visit the charming Old Town including its medieval walls and Ottoman baths. Enjoy the final night’s dinner onboard this evening as you head for Turkey.

As breakfast is served, the train winds its way along the Sea of Marmara towards Istanbul’s historic Sirkeci station. Mid-morning, your journey from Venice comes to an end and you will say goodbye to the Golden Eagle train that has been home for the past six nights. Leave the station to a view of the Golden Horn and the Bosphorus, then check into the Ritz-Carlton, Istanbul (or similar) for the final two nights of your journey.

Continue your adventure in the spectacular and bustling 3,000-year-old city of Istanbul. As the only city in the world built on two continents, Istanbul has a unique mix of Eastern and Western culture. Experience it all during your free time here by browsing the thousands of vendors of the Grand Bazaar and sampling Turkish delights amongst colorful piles of seasonings at the Spice Bazaar. Cross from Europe to Asia on a Bosphorus strait ferry—if you’re lucky, you might even spot a pod of dolphins along the way! You’ll also want to explore some of the city’s famous architectural masterpieces, such as the brilliantly tiled Blue Mosque and the ancient Hagia Sophia, plus the beautiful gardens stretched between them.

Check out of your hotel and head to Istanbul Airport for your flight home. 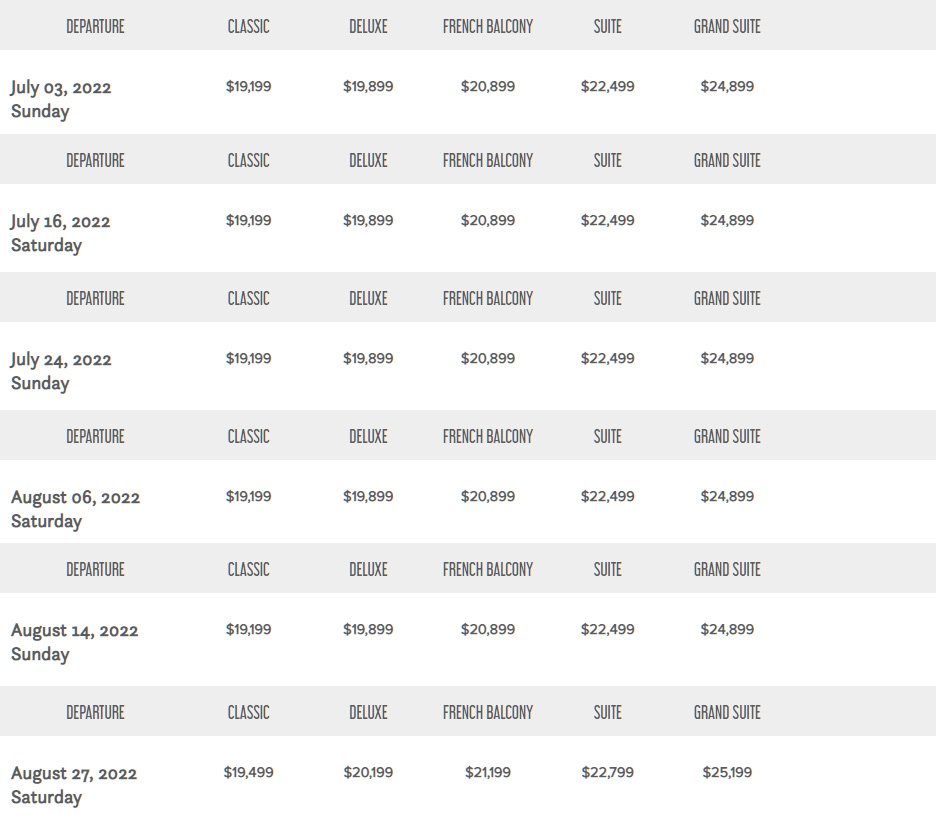